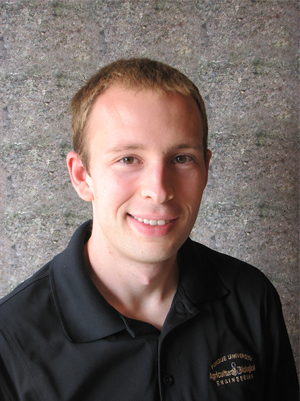 His role at Czero includes advanced algorithm development, simulation, modeling and hardware-in-the-loop (HIL) testing, a technique for efficiently testing the physical hardware and controls of an embedded system by simulating some or all of the systems with which it interacts.

One of the most powerful tools I’ve developed is an algorithm written in MATLAB that optimally controls Simulink models through dynamic programming to uncover a system’s true capabilities and reveal effective, though sometimes counterintuitive, control schemes. This unbiased view of the system as a whole might reveal, for example, that running a transmission in a somewhat less efficient manner is the best option for maximizing overall fuel economy. In some cases, we can use this knowledge to develop control schemes that optimally balance component efficiencies with machine performance for varied and unpredictable real-world conditions, thus ensuring a given system is operated at its full potential. —Mike Sprengel, Mechanical Engineer & Analyst
Czero

Mike’s engineering work has included using neural networks to develop optimal, often non-linear control methodologies. An example of how this works would be training an intelligent control system on generalized trends between velocity and optimal machine state; in the field, that control system could then use a brief history of machine data to adjust the system for better performance in the present operating conditions.

Called a blended hydraulic hybrid, the system combines a hydrostatic transmission, a parallel hybrid, and a selectively connectable high-pressure accumulator. This configuration merges the responsive nature of a hydrostatic transmission with the energy-saving potential of a hydraulic hybrid, while allowing efficient operation under a wide range of conditions.

Mike’s research team investigated the blended hybrid architecture using a variety of techniques, among them using dynamic programming to compare the energetics of the blended hybrid with various powertrain architectures, an approach that eliminated the controller’s influence on fuel efficiency thereby ensuring a fair comparison. To further explore the architecture, the team constructed a blended hybrid on a dynamic hardware-in-the-loop transmission dynamometer and evaluated system performance over a range of drive cycles.

In order to prevent differences in driver experience from potentially hindering adoption of this new technology, a significant part of Mike’s research involved developing and testing control strategies to replicate the feel of a conventional on-road vehicle with the blended hybrid architecture. The team then validated and showcased the concept by converting an SUV into a full-scale blended hybrid demonstration vehicle.

Regarding his new role at Czero, Mike says he looks forward to the diversity of R&D projects Czero undertakes in advancing energy-sector and automotive technologies. He sees an especially big opportunity to improve off-highway vehicles, such as those used in agriculture, construction, transloading and mining.

In the past, productivity was the top priority for heavy industrial off-highway vehicles. Now, fuel efficiency is a much bigger part of that equation because lifetime fuel cost can often exceed the initial machine cost of a million- or multi-million dollar machine. Using new hydraulic hybrid architectures and intelligent control systems to update traditional technologies, we have an opportunity in some cases to achieve reductions in fuel consumption of 40…50…60% and up. For operators that means tremendous savings on fuel costs and a corresponding reduction in emissions. —Mike Sprengel, Mechanical Engineer & Analyst
Czero