Both historic (OSU) and ongoing

ARTICLES ABOUT THE PROJECT

We offer concept-to-prototype mechanical engineering R&D for automotive powertrains, high-bandwidth hydraulics, and clean energy. Learn how we can help your team.

The innovation is an NGV engine that uses one or more of its own cylinders to compress gas from low-pressure natural gas service lines for self-refueling. In preparation for commercialization, Czero has contributed significantly to engineering the next-generation design.

Expanding on the technology concept of liberating NGVs from today’s limited network of natural gas refueling stations, Onboard Dynamics has also developed a mobile natural gas compressor. The compact, off-grid CNG system is powered by the natural gas it compresses, rather than requiring electricity.

In January 2017, Southern California Gas Co. (SoCalGas), a subsidiary of Sempra Energy (NYSE: SRE) the largest natural gas distribution utility in the U.S., contracted to fund a demonstration project. For the project, two California school districts will use the mobile compressors to refuel CNG buses in their fleets.

In a short time frame, we have made tremendous progress in making natural gas both a cost-effective and convenient refueling option, thanks to our incredible team and the support we have received at the state and national level.
—Rita Hansen, CEO
Onboard Dynamics 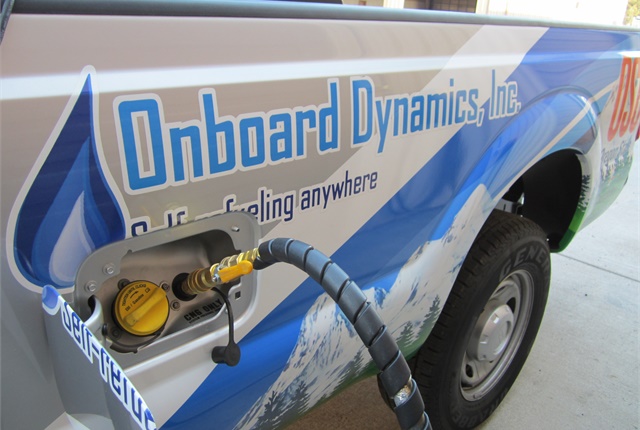 The right technology at the right time

As of 2016, there were fewer than 2,000 public NGV refueling stations across the U.S. So developing a commercially viable alternative to building a vast, expensive network of natural gas fueling stations would be a game-changer for the automotive industry.

For consumers, since natural gas costs about $1.75 per gallon equivalent less than gasoline, using natural gas as automobile fuel could cut fuel costs by more than half. [Note: Fuel costs fluctuate over time; so this is my no means a hard number or fixed comparison.] Plus, it’s hard to beat the convenience of fueling your car at your home or business.

Right now we have an impasse in natural gas vehicle adoption. There aren’t enough NGVs on the road to make building a public natural gas refueling station financially attractive, and at the same time, there aren’t enough refueling stations to give potential NGV owners confidence they’ll be able to find one when they need one. We need a critical mass of NGVs and refueling stations, at the same time, for NGV utilization to really take off. Onboard Dynamics technology addresses both problems at once: it makes the vehicle the fueling station, tapping into natural gas distribution infrastructure that already exists. This innovation could be the tipping point for widespread adoption of natural gas vehicles, and the ARPA-E award will help achieve that ambitious goal. —Guy Babbitt, Co-founder and CEO
Czero

$4 million in early-stage R&D funding from the U.S. Department of Energy

Following the first year of R&D, and due in part to Czero’s contributions, the U.S. Department of Energy’s Advanced Research Projects Agency–Energy (ARPA-E) awarded additional funding for the project, adding $300,000 to the $700,000 ARPA-E grant that launched the project in 2012.

In 2014, based on the success of initial R&D and the potential impact of the new technology, ARPA-E awarded $3 million to Onboard Dynamics to commercialize the innovation. As an R&D partner,  Czero continued providing critical engineering services through this stage of the project, serving as an extension of the Onboard Dynamics team.

In 2016, Onboard Dynamics secured an additional $3 million from ARPA-E, Portland Seed Fund, NW Natural and other utilities, and private investors.

In early 2017, looking to support the growth of natural gas utilization as an alternative fuel for vehicles, SoCalGas signed on to fund field demonstration and testing of the mobile refueling units in Mountain View School District in El Monte, California and the Antelope Valley Schools Transportation Agency in Lancaster, California.

Onboard Dynamics was among 32 innovators selected to present at the first-ever White House Demo Day, hosted by President Obama on August 4, 2015. The event showcased the diversity in entrepreneurship at the heart of the U.S. innovation economy, bringing together startup leaders with different backgrounds from across the country to share innovation success stories and discuss new ideas.

At the event, Onboard Dynamics CEO Rita Hansen used a 3D-printed model of the cylinder head with working valves to show how the dual-function, natural-gas compressing automobile engine works.

President Obama’s remarks from the event

U.S. policymakers increasingly are evaluating how alternative fuels can impact our country’s overall energy use. With Onboard Dynamics’ unique natural gas compression technologies, vehicle owners can save money and significantly reduce their greenhouse gas emissions by refueling with natural gas or renewable natural gas instead of traditional fuels.
—Rita Hansen, CEO
Onboard Dynamics

Showcased by ARPA-E at the Clean Energy Ministerial (CEM7)

In 2016, ARPA-E featured Onboard Dynamics in its Startups & Solutions Showcase exhibit at the seventh Clean Energy Ministerial (CEM7) in San Francisco. A global conference of energy ministers, delegates, business leaders and researchers from around the world, CEM7 fosters global collaboration in advancing clean energy solutions.

Onboard Dynamics was among 100 innovators recognized for developing new technologies to reduce greenhouse gas emissions and accelerate the transition to clean energy.

Czero designed and produced the 3D-printed model of the gas-compressing NGV engine that Onboard Dynamics showcased at the ARPA-E exhibit.

Czero’s role in the earliest stages of R&D

Czero was able to engage last minute to displace a well-known automotive engineering company at a fraction of the price. Over a year into the project, Czero has continued to be responsive and trustworthy; their engineering performance has contributed significantly to an increase in project funding from the sponsor. As the project principal investigator, selecting Czero as an engineering services company has been one of the best decisions I have made.
Chris Hagen, Assistant Professor, Energy Systems Engineering
Oregon State University – Cascades

Since that time, Czero has been an integral R&D partner—through multiple rounds of funding and related product development—in taking what is now Onboard Dynamics  technology from concept to prototype to field testing.

A program of the US Department of Energy, created by an act of Congress in 2007 and launched in 2009, ARPA-E supports R&D for advancing scientific discoveries and technologies that have potential high impacts on US national security, economic prosperity and environmental protection. This highly competitive program provides funding, technical assistance, and support transitioning viable new technologies from the R&D stage to market readiness in the commercial sector.