Czero is assisting researchers from Colorado State University (CSU) and the Colorado School of Mines (CSM) in developing a national test facility for a new generation of instruments for detecting methane that leaks from oil and gas infrastructure between production and end use. The facility will simulate different O&G operations:

Companies and research organizations developing new and improved natural gas sensors will use the CSU facility to test their instruments under real-world conditions.

Occasionally components of natural gas facilities allow gas to escape. These new technologies reduce monitoring costs enough that facilities can be monitored frequently to catch leaks as soon as they start.

ARPA-E awarded R&D funding to CSU for the three-year project through the program known as MONITOR (Methane Observation Networks with Innovative Technology to Obtain Reductions). ARPA-E established MONITOR to help address the problem of methane emissions and “fugitive” gas that leaks uncombusted into the atmosphere throughout the oil and gas supply chain, contributing to global warming.

Methane has 28-36 times the Global Warming Potential (GWP) of carbon dioxide over a 100-year period, meaning it traps heat that much more effectively than CO2. It’s also a chemical precursor to ozone, another greenhouse gas.(1)

In the U.S. Greenhouse Gas Inventory Report: 1990-2014 released in 2016, the U.S. Environmental Protection Agency (EPA) identified natural gas systems as the number one source of methane entering the atmosphere in recent decades.(2) 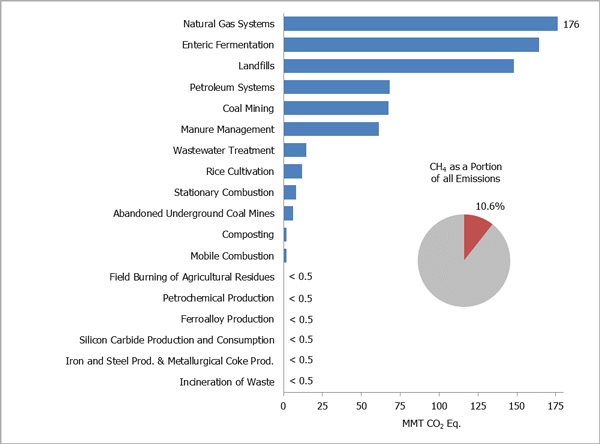 Data from the U.S. Greenhouse Gas Inventory Report: 1990-2014, published in 2016 by the U.S. Environmental Protection agency. MMT = million metric tons. Carbon dioxide (CO2) is conventionally used as the GWP reference molecule (GWP = 1) to which other chemicals are compared in determining their relative heat-trapping effects as greenhouse gases, hence the X-axis in the chart above showing methane measured in MMT CO2 Equivalent (Eq.).

The report included data from several collaborative studies, led by CSU researchers and published in 2015, that quantified methane emissions from natural gas gathering and processing facilities and natural gas transmission and storage systems in the United States.(3,4)

CSU has been involved in three major methane emissions studies. In all our studies—and those of other organizations, too— we’re seeing that 5 or 10 percent of components account for 40 to 60 percent of emissions. Finding these rare leaks ASAP could have a big impact on emissions.

A recent CSU article highlighted the significance of these O&G industry methane emissions in practical terms:

[CSU] Researchers found that methane emissions from gathering facilities are substantial—1,697 Gigagrams (Gg) per year—while emissions from processing plants are less than half that amount—505 Gg per year. These emissions are equivalent to the amount of natural gas consumed annually by 3.2 million U.S. homes and represent a potential loss of $390 million in revenue to producers.

Why we need better, lower-cost technologies for methane leak detection

With the expansion of U.S. natural gas infrastructure leading to a corresponding increase in methane emissions, ARPA-E saw the need for accurate, lower-cost sensors to help mitigate the growing problem. CSU engineering professor Bryan Willson, who recently served as program director for ARPA-E, was instrumental in establishing the MONITOR program to accelerate development of new technologies for this purpose.

Methane emissions sensors can cost from $20,000 to $100,000. Extrapolating that cost to extensively monitoring even our current oil and gas infrastructure, it would cost tens of billions of dollars to do so. The MONITOR program would like to see an annual cost of under $3,000/year for a monitored site to achieve a 90% reduction in leaked gas.(8)

The MONITOR program has a sharp focus on a well-defined techno-economic challenge. At the same time, it invites widely varying technology approaches, ranging from fixed sensors to satellite imaging. That combination of challenge specificity with open-mindedness regarding solutions is a smart way to set the stage for innovation.

Natural gas is a big part of our energy present and future. By developing the right new technologies, we can make it easier and more affordable to detect methane emissions quickly; we can reduce lost revenue for natural gas producers; and we can reduce both greenhouse gas effects and waste of a finite natural resource.

Where we need these new methane sensing systems

Methane leaks often occur at equipment connection points and from valves, pumps, compressors, pneumatic controllers, dehydrators, acid gas removal (AGR) units and pipelines, during both operations and periodic maintenance. In examining studies of such methane leaks, MONITOR found totals ranging from 1.65% to 2.8% of production, with some localized rates as high as 17% of production.(9)

In the oil and gas industry, there’s a lot of regulation at the wellhead, and there’s a lot of regulation at the fuel station. But a lot of methane emissions come from the in-between points, from faulty or aging equipment and infrastructure. That accounts for many of the localized spikes we see in the methane data we aggregate, analyze and report via the Intermountain West Data Warehouse. To track and mitigate methane leaks more effectively, we need better monitoring technologies, standardized data collection and timely reporting from those in-between points. 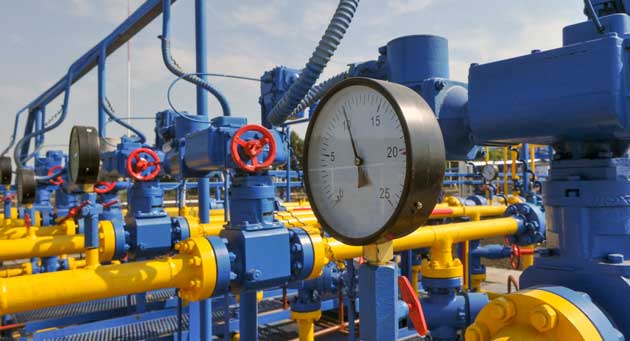 The field testing facility that CSU, CSM and Czero have begun developing will give research teams—many also funded by ARPA-E MONITOR awards—turnkey access to a high-quality simulator of realistic methane emissions scenarios. This will spare technology developers the time, cost, liability and complexity of either building their own test facilities or partnering with oil and gas producers to do sensor testing in the field.

This test facility is a real multiplier in that it will make it easy for numerous R&D teams, from different companies and research institutions, to test and prove new technologies faster. It will also make it easier to gather high-quality data for scientific comparison of the performance of very different methane sensing systems.

Sub-facilities will replicate the equipment and infrastructure used throughout natural gas production, transmission, processing and storage. For test standardization and fidelity to real-world conditions, researchers will have precise control of the location, frequency, duration, composition and volume of methane leaks.

The ARPA-E MONITOR program and site developers expect to test methane sensing systems that use laser spectrometry, catalytic sensors, imaging sensors and biological sensors that might be fixed, mobile (mounted to vehicles or unmanned aircraft), networked or satellite enabled.

Involved since project launch, Czero’s team is collaborating with CSU and CSM researchers on site preparation, planning and permitting through the City of Fort Collins. As we move from planning to implementation, Czero engineers will be available to design, model and test gas leak mechanisms, control systems and facility infrastructure. Developers anticipate the facility will be operational in 2017.